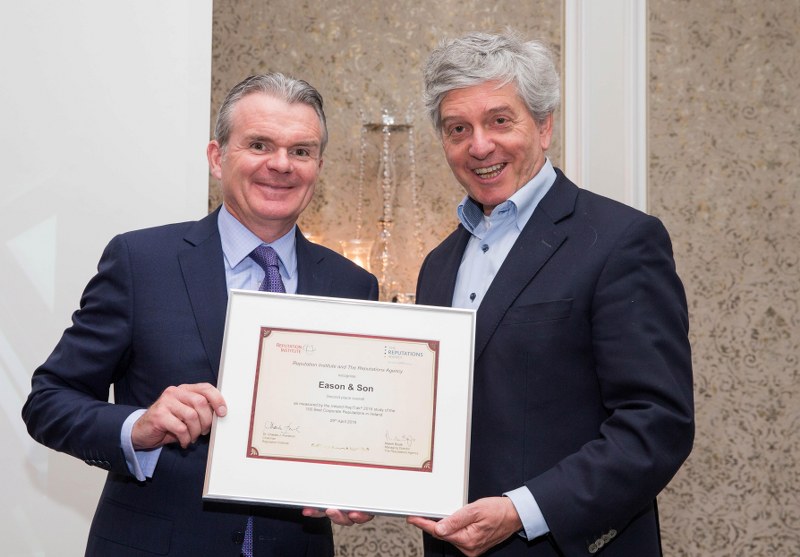 Thursday 19th May 2016: Eason has been named as the most reputable retailer in Ireland, according to the annual Ireland RepTrak® 2016 study, which ranks the 100 largest and most visible organisations in the country. The iconic retailer, with a longstanding heritage that dates back as far as 1886, was also ranked as the second most reputable firm in Ireland.

Ireland RepTrak® 2016 is an independent study based on over 5000 survey responses from the general public, from January to March this year, and rates Ireland’s most renowned companies on four consumer indicators: trust, esteem, admiration and good feeling, as well as across the seven dimensions of reputation – leadership, products & services, innovation, governance, workplace, performance and citizenship.

Conor Whelan, MD of Eason, commented: “To be rated so highly by consumers, is a fantastic accolade for the Eason brand and is a great endorsement of both our company and our people. The results of the study are testament to our strategy in recent years to transform our company and the Eason retail experience, enhance our engagement both in store and online, and connect with customers in a meaningful way.”

Other retailers ranked in the research include Lidl (5th), Aldi Stores (7th) and SuperValu (11th). Indigenous Irish organisations were well represented in the top rankings, taking up all of the top three coveted positions - Bord Bia (1st), Eason & Son (2nd) and An Post (3rd).

Eason currently employs over 1,000 people and operates 64 stores across the Island of Ireland.

Best known as Ireland’s leading retailer of books, stationery, news and magazines, Eason’s vision is to “Inspire and Engage Minds of all Ages.”