Eason invites schools, community groups and volunteers to get involved with Fighting Words 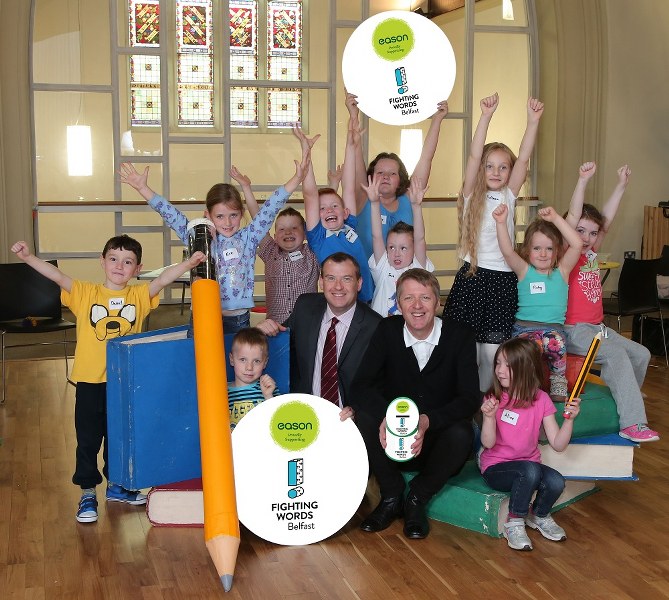 Eason’s & Son Ltd, are proud to announce a three year sponsorship to support the Fighting Words project in Belfast and invite schools, community groups and volunteers to get involved. Based in the heart of East Belfast at Skainos, Fighting Words is rapidly establishing itself as a leading creative writing centre for children and young people. The project offers free creative writing workshops for groups of young people aged 6-18 years. Participants set out on a story-writing journey, working at first collaboratively and then individually to create new stories, all leave as published writers with their own illustrated storybook.

The partnership will run over a three year period and will donate charity tins in Eason’s stores throughout Northern Ireland and the Republic of Ireland. ‘Brendan Corbett, Group Head of Marketing at Eason said, ‘We are really delighted to announce Fighting Words as Eason’s charity partner. Children are central to our literacy programme in Eason and we are delighted to be able to support the amazing work that Fighting Words does to promote creative writing’. Founded in 1999 by booker prize winning author Roddy Doyle and Sean Love, and launched in 2015 in Belfast, Fighting Words aims to provide primary and secondary level students with the chance and space to explore their imaginations through free creative writing workshops, whilst also helping to improve self-expression, literacy, self- esteem and self-confidence.

Fighting Words patron Glen Patterson said, ‘My first job when I left school was in Crane's bookshop in Belfast. I loved being sent (and would try to dream up reasons to be sent) to the Eason’s warehouse on Donegall Street. Now there was a treasure trove. I get a little reminder of that today, every time I walk down the stairs of the Eason’s in Belfast. I get a reminder of it when I walk up the stairs to Fighting Words. Something is about to happen, you don’t know what yet, but whatever it is it won’t be dull’.

The sponsorship heralds Eason’s on-going commitment to embed a love of stories and story-telling in young people. They understand the importance of literacy and language as forming a vital part of a child’s personal and social development. Fighting Words Belfast is looking for schools, community groups and volunteers to get involved. If you would like to bring a group of young people to a free Fighting Words Belfast workshop, volunteer and / or find out more about up-coming events call us on 028 9023 0660 or visit www.youngatart.co.uk. For further information, please contact: