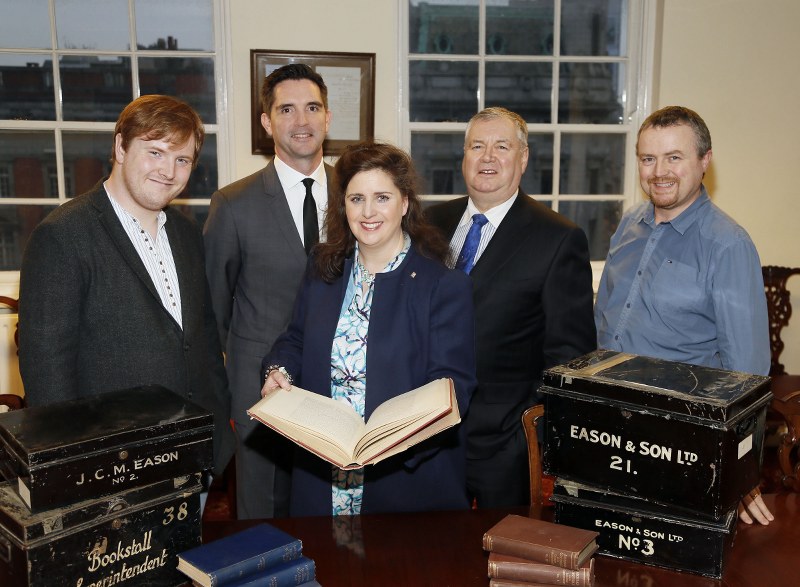 Eason are the only retailer still trading from O’Connell Street as they did 100 years ago.

To commemorate the 1916 Easter Rising, Eason has developed a specially created interactive, digital archive, which showcases Eason company documents from 1916. Taken directly from the archives of the O’Connell Street store, the original documents, particularly the letters of Charles Eason, provide a fascinating perspective on the commercial life of Dublin during the time of the Rising.

The archive, meticulously maintained down through the years, contains a captivating account of how the Eason business was effected by the events of Easter 1916. From the concerted efforts made to maintain the supply of newspapers to outlets around the city at the outbreak of the Rising, through to the incursion by Volunteers into the Eason premises and the concern for the welfare of staff and ultimately the uncertainty of the fate of both Eason shops on Middle Abbey Street and Sackville Street (now O’ Connell Street) which were destroyed within a week of the rebellion commencing. The archive materials are complimented with an Easter 1916 timeline that recounts the events before, during and after the Rising and with a gallery of over 30 images from the era.

This archive is now available to the public to review in the Eason store on O’Connell Street, through touch-screens on the ground floor. The screens are situated within a new “Commemorating 1916” section that carries the largest range of 1916 books in the country. This vast collection of publications represent every aspect and facet of the Easter Rising.

Speaking at the launch, Brendan Corbett, Eason Group Head of Marketing said; “We have created a dedicated section here at Eason O’Connell Street where we are commemorating Eason’s connection with the 1916 Easter Rising. We know from our archives that our shops on Lower Sackville Street and Middle Abbey Street were seized by the Rebels before subsequently being destroyed in the cross-fire during Easter week. Our commitment to our staff, our customers and the city of Dublin at the time was unwavering and within 4 years both shops were rebuilt and 100 years later we are proudly trading from the same locations. This is the story we are sharing with the public for the first time within our new 1916 section on our O’ Connell Street store.”

The digital archive, original documents and vast collection of 1916 reading will remain in situ for the coming months to commemorate the events of the Easter Rising, 1916. @easons #eason1916

Notes to the Editor: