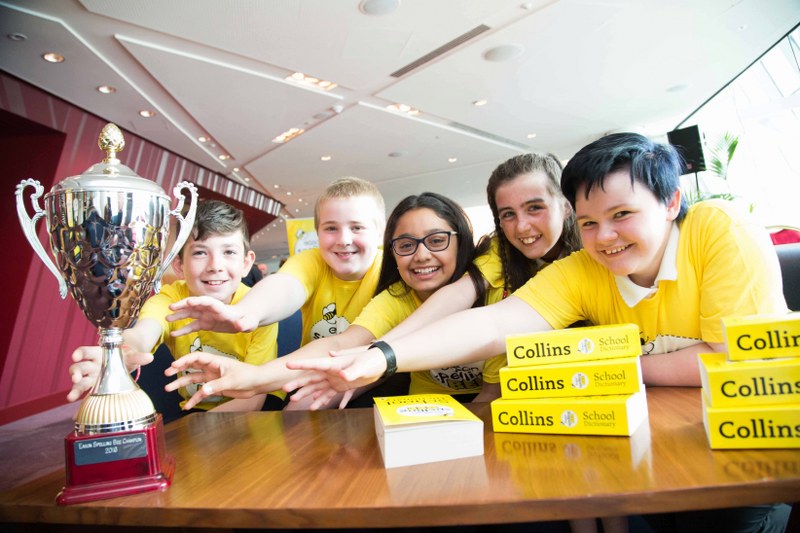 Monday, 20th June 2016: Eason is delighted to announce Ella Hadley as the winner of the All-Ireland Eason Spelling Bee Final 2016. The student from Grange National School in Clonmel, Co. Tipperary fought off stiff competition from spelling enthusiasts from around the country to be crowned Eason’s champion speller at the Bord Gais Energy Theatre. Ella took the trophy for her spelling of the word Acronym, which is defined as ‘A pronounceable name made up of a series of initial letters or parts of words’. The 12-year-old came up trumps in the highly anticipated final against contestants from Ulster, Leinster, Munster and Connacht. Speaking about her win, the 6th class student said; “I am delighted to have won the Eason Spelling Bee 2016, I practiced a lot on the lead up to today and I am so excited to take home the trophy to my school.” The final was broadcast live on Today FM’s Anton Savage Show from the Bord Gais Energy Theatre in Dublin. The nationwide competition, is part of an overall Eason literacy and reading initiative that aims to inspire children to develop a greater appreciation of words in a fun and educational way, and to encourage them to perfect their spelling and pronunciation skills.

Brendan Corbett, Group Head of Marketing at Eason, said; “Today’s final has been so exciting for the students and for us here at Eason. We would like to congratulate Ella on winning today, Ella put in a huge amount of effort and dedication on the lead up to the final and it has paid off. We would also like to thank the other finalists for their participation and to their classmates, families and friends for coming along to support. The Eason Spelling Bee continues to go from strength to strength, and in this our 6th year, we’ve seen a record number of over 1,100 schools participate. The competition has been great fun for the children but it is also very beneficial as spelling is a great way to help develop reading and literacy skills and we’re really looking forward to next year.”

This ultimate spelling contest started out with registered schools holding their own in-school bee to find their school champion. The Spelling Bee team then travelled around the country to hold the County Final Bees, which lead to four Provincial Finals culminating in the All-Ireland Final today. Ella takes home the prestigious title of Eason Spelling Bee Champion 2016 and was also awarded a goodie bag full of books worth €500. Ella’s School, Grange National School in Clonmel will also receive a mountain of books for their library to the value of €7,500.

Check out full details of the Eason Spelling Bee 2016 www.easons.com/spellingbee and @easons #EasonSpellingBee
About Eason
Eason Ltd is Ireland’s largest and oldest standing book retailer in Ireland selling an extensive range of books, newspapers, magazines, stationery, cards and more. Eason has more than 60 outlets through Ireland and Northern Ireland and you can visit their online store at www.easons.com. Follow Eason on Facebook – Facebook.com/EasonsIreland and Twitter @easons